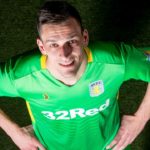 According to the BBC, Championship side Aston Villa have agreed to sign Croatia football hero  goalkeeper Lovre Kalinic on a four-and-a-half-year deal.

The 28-year-old will join Villa from Belgian top-flight side Gent when the transfer window opens on 1 January.

Smith said: “We are delighted to be signing someone of Lovre’s experience and quality. He is an outstanding goalkeeper.”

Kalinic was a member of the Croatia squad that finished runners-up at the 2018 World Cup, playing only in their final group game against Iceland.