The Guardian newspaper’s Travel section has named Plaža Divna (translates as ‘wonderful beach’) on the northern side of the Peljesac peninsula as one of the forty best beaches in Europe. 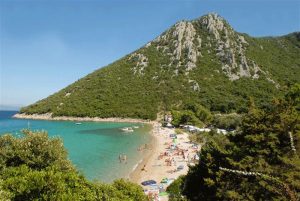 It says it lives up to its name and describes the beach’s location as key to its ranking “with pine-covered hills flanking the little pebbly bay” and “the marine life between the beach and the tiny island facing the bay makes for brilliant snorkelling”. The fact that the beach has some areas to find shade and has a beach café, add to its attraction.

The Peljesac peninsula – a long tongue of land clinging onto the Dalmatian coastline by a narrow slither of land about an hour north of Dubrovnik – is often overlooked in favour of the big hitter islands of Korcula, Hvar and Brac, yet apart from its minute land connection, it has all the characteristics of an island. It is surrounded by sea and has the relaxed feel of one. It has hidden idyllic coves, mountains and sweeping valleys and fine wines grown in a host of wineries.

Getting to Peljesac from the north is about to become a whole lot easier with the opening of the Peljesac Bridge in July 2022, which will significantly cut the journey time by avoiding the need to negotiate the two Bosnia & Hercegovina border crossings or use ferries.

The peninsula is of course also well known for water sports, in particular windsurfing and kitesurfing, which are extra-specially good because of an afternoon mistral which blows down the channel between Korcula and the peninsula, giving excellent conditions.

Orebic is the main town in the northern end of the peninsula, a family-friendly place with lovely beaches, restaurants and shopping opportunities as well as being the gateway to Korcula (just a 10-minute ferry hop).

In the south, Ston is famous for its shellfish (the best in the region) and restaurants which offer oysters as a speciality, as well as for its salt production, wonderful hill fort and incredible 14th century walls.

Between the two is lovely countryside studded with vineyards, and roads to coastal villages and beaches.