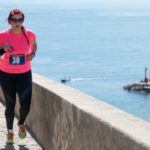 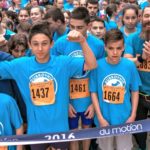 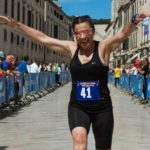 The  DuMotion Runners Days in Dubrovnik are being held over the 29th and 30th April and Dubrovnik has been filled with runners taking part in the two day event which features the Dubrovnik Half Marathon, a 2.5k race around the Dubrovnik Old Town walls and a 5k open charity run. There is also a children’’s race. According to the Dubrovnik Tourist Board, the event attracts amateur and professional athletes from more than 40 countries.

The Du Motion races are apparently well known for their panoramic routes which take runners through the old town of Dubrovnik and explore the coastline. The finish line is on the main street of the old town called “Stradun” – the long, wide, and stunning ancient street is perfect for a spectacular finish.

This is the third consecutive event and participation has been as enthusiastic as ever.

Among the most exciting of the race events, the “Run the Wall” race event took place on 29th April and according to the Du Motion website, the route is very tricky. At 2.5 km the route around the old town walls involve runner going up and down steps, along slippery marble paths and around a track of approximately 1940 metre in length. The maximum height of the walls is around 25 metres so it’s not for the faint hearted although the views are incredible.

The main event though is the Dubrovnik Half Marathon which started at 9.30 this morning on the 30th April – the start and finish are both on Stradun, the most famous and impressive street in Dubrovnik. The event has a five star endorsement by European Athletics and the route is 21.1 km.