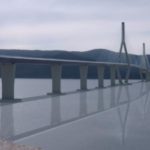 According to Euractiv.com, Croatia will go ahead with the long anticipated “Peljesac Bridge” which would connect the two sections of Croatia currently set apart by a slice of of the coast granted to Bosnia and Hercegovina. At the moment, to drive down the coast between Split and Dubrovnik, drivers must cross 2 lots borders slowing journey times. Queues to cross borders also increase significantly once the summer tourist season kicks in so the situation is rather inconvenient.

The bridge which has been in debate for some years now, has been given the go ahead financially after the EU approved a loan of €357 million Euros which is 85% of the total build cost needed to commence the project building. The completion date has been set at 2022 and will utilise the Peljesac Peninsula which creates a naturally thinner channel at that part of the coast to enable the bridge building and drivers will be able to continue on down the Peninsula, on to Dubrovnik in the south without the need to cross any borders.

With almost 16 million tourists having a Croatia holiday per year nowadays, the bridge will certainly improve the coastal traffic and shorten journey times.

Regional Development and EU Funds Minister Gabrijela Zalac, who signed the deal in Brussels, hailed it as a “historic moment for both Croatia and the EU”.

“We are finally on the path… to completely link Croatia’s territory which will also secure the continuity of EU’s territory,” Zalac said, according to her ministry statement.

The bridge build was started in 2007 but was not finished due to finance issues and since 2013 when Croatia joined the EU, the project has been on the table but hasn’t been finalised until now.