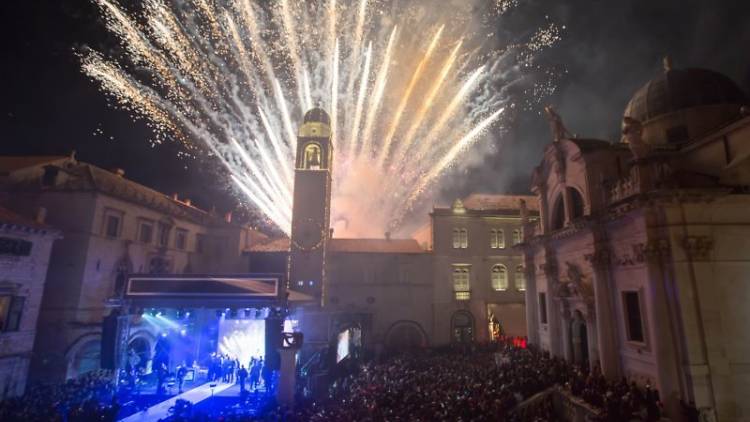 Where to Celebrate New Year’s Eve in Croatia!

Dubrovnik’s New Year’s Eve Celebrations will start at 10 am, at the Stradun – Klapa Ragusa, combine with the Libertas and brass band to give a big send off to 2018.  There will be carols, a cocktail party and the Mayor’s New Year message. There is also a New Year’s Eve celebration for children starting at a noon where Severina will entertain everyone; she will also take part in the evening celebrations along with popular Croatian band Silenty and DJ Kameny.

For the more classically orientated there will be the New Year’s Eve concert by the Dubrovnik Symphony Orchestra … and of course plenty of fireworks!

New Year’s Eve is the big party night of the year in Split.  The main stars of this year’s celebration will be popular local group Magazin and Jasmin Stavros.  Magazin will play up until the countdown at midnight, with Stavros taking over ’till early in the morning.

Salsa New Year’s Eve will also take place at Voćni square as a part of the 3-day Salsa Split Silvestre Nights festival and finishing with a spectacular firework display.

The fourth Zadar Advent (Christmas Market) lasts until 2nd January, and will offer everyone good fun, great music, concerts and holiday delicacies. New Year’s Eve celebrations start at 11am with the Children’s New Year on Narodni trg (People’s square), and at 10 pm the Forum band and Neno Belan & Fiumens will take over the stage for the celebration.  At the Petar Zoranić square at 8 pm, there will be a concert by Zoran Jelenković after which the Rockatansky band will take over…

Rovinj also isn’t skipping a chance to become a true Christmas fairy tale location.  For New Year’s Eve, celebrations start in the morning at 10 am.  You can ice skate at Obala Pina Budicina after which you can celebrate with your children too as New Year’s Eve for little ones is planned from 11 am to 12 am.

The Batana Eco-museum is offering a noon programme under the name “Holidays at the House of Batana with music ‘SPACIO IN THE SQUARE’: A meal for the end of the year” after which, on the main square, you can enjoy the Party band from 9:30 pm and then the main show will be brought by the legendary band Prljavo kazalište.

Fascinating Advent by the Sea in the festive atmosphere of Opatija is a must, with stunning decorated streets and squares, an ice skating rink, and various musical and theatrical performances at numerous magnificent locations.

There are plenty of choices for New Year’s Eve – at 10am in the Market Hall there will be some ‘brudet’ fish stew and Kvarner winemakers’ fare, and at the Open Air Theater children will find some fun at 11 am and at the same time at the Terrace of the Hotel Continental you can hear a musical performance by ‘PANONIA’ tamburica players.

From noon till 7pm at Juraj Šporer Art Pavilion there will be ‘Meeting the Nutcracker and the elves’.  A couple of hotels will have their evening celebrations organised with great music bands. At the Hotel Continental, the Exotic pop band will play, at the Crystal Hall of the Hotel Kvarner Dellboys will entertain the crowd and at the restaurant of the Hotel Admiral, the band Pešekani will be playing. In front of the Juraj Šporer Art Pavilion from 10 pm till 2 am there will be New Year’s Eve party with the Groovers.

This year’s traditional concert at Korzo, at which you can bid farewell to the old year and usher in the new year, has Rijeka written all over it. Coming to the stage at 10 pm is the alternative rock band Nord, who are bound to warm up the crowd and make them dance.

The party will resume with the bands Fit and Whiteheads, to take you into 2019. The rapper Vojko V, who hails from Split, will make sure that the New Year’s Eve ends in spectacular fashion.

For a good party you could go to ExPort De notch performers will entertain the audience, until the early hours when the after party is scheduled at the Crkva club. Hitting the stage first are Fryer & Boo Dale, whose dancing waves of house music will make us start the new year with a splash. You can enjoy the sets of some of the best DJs in the city – Life4Funk, Lemon i Alen Sforzina – all night. For the kids, there will be morning fun at the Trsat Castle.